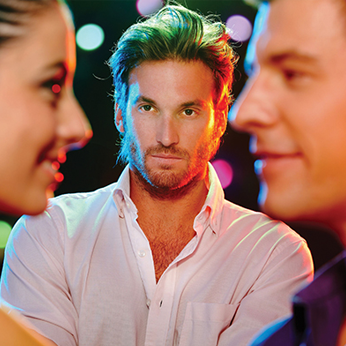 Jealousy is one of the worst suffering and strongest feeling of love at the same time, and we are often ashamed because of it, because it conceals the fears and frustrations. Let's try to find out what exactly we have in the roots of jealousy and what benefits can be derived from it. Read more with our blog and join our omegle video chat.

Jealousy is the "dark side" of lovers and very few can escape from it. It is complicated and deceptive feeling, which often is hidden in our disappointment and unspeakable desires. And sometimes jealous - it's just jealousy, which manifests itself in many different ways. If we get to know the mechanism of this feeling, it will help us to "defuse" the negative of its destructive potential and eventually better understand ourselves.

Where it comes from?

According to psychoanalysis, jealousy has its origins in early childhood, and when we have experienced it is particularly leaves a trace in us. When we are jealous, in fact, we are living this moment again - the old pain experienced from a childhood: in fact when we were weaned, we felt abandoned, betrayed. According to the psychoanalyst Jacques Lacan, then, as we have experienced this suffering, which was necessary, it affects us in our current relationships. For some, it is a very severe pain. If you want to have some fun – join our bazoocam.

Cannot you be jealous and cheat at the same time?

This is a common problem. Consider as an example the story of 42-year-old Gianni. Before marriage, he was a real ladies' man. Subsequently he decided to "clean up its act" and get married. His wife confirms his behavior, however, Gianni seething with jealousy when he sees her talking to other men. Dumping suspicions of infidelity and betrayal on our partners, we are quenching our guilt. This situation is an example of the "projected jealousy" "He credits his desire to cheat on his wife to her, - says Edorado Giusti, director of the specialized psychotherapeutic schools in Rome. - Dumping her suspicions of infidelity and betrayal, he quenches his guilt" This situation is example of the "projected jealousy," as defined by Sigmund Freud.

Is it true that women are more jealousy?

No, but they are showing it brighter. They are more curious than men with respect to the opponent, and it’s doesn’t matter is she (opponent) real or not. They want to know everything about her: hair color, clothing sizes, interests. Me, often, deny the existence of an opponent, or do not recognize it. "My husband always swore that I was not jealous, - says 36-year-old Clara. - And I think he really thought so. But that night, when I told him about a little romance of the time, when we were already familiar with him ... He screamed at me all night" Typical male reaction: a man can long remain indifferent until he faces a betrayal, in the face of which he can "fail". But women are more naturally jealous.